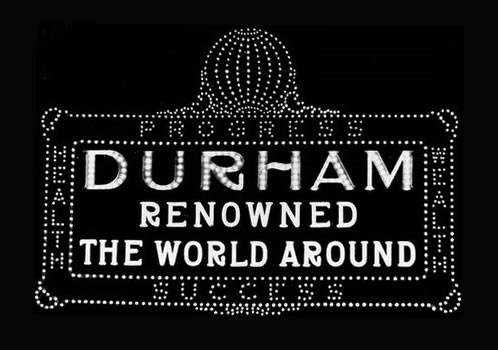 This weekend the travel section of the New York Times published an article titled “The 41 Places to Go in 2011”.  The 41 places tend to be exotic, including Santiago, Chile, Koh Samui, Thailand, Iceland, Milan, London, Loreto, Mexico, Oahu, Melbourne, Australia, Durham, North Carolina, Singapore,….wait, was that Durham, NC?  Our very own Durham in the top 41 places to go in 2011 as named by the New York Times?  Right there, with places like Oahu, Singapore, and Egypt?

Yes, that’s right, Durham, NC is #35 on the list of the top 41 places to visit this year.  I know how much I love this town so it is great to see others acknowledge it as well.  What’s even better is that the NY Times is touting it as a destination, somewhere that you *need* to visit.  Great news for Durham as a whole.

Here is the full list of cities and the write up from the NY Times article on Durham:

3. Koh Samui, Thailand
A toned-down version of Phuket, heavy on wellness and food.

4. Iceland
Where a country’s hardships are a visitor’s gain.

6. Republic of Georgia
A rustic ski wonderland on the verge of discovery

7. London
Anticipating the 2012 Olympics, a slew of new hotels and restaurants.

8. Loreto, Mexico
A beach hideaway with sport fishing gets a luxury resort.

9. Park City, Utah
Beyond the film festival, a growing group of top-tier resorts.

10. Cali, Colombia
Cafe culture is on the rise while salsa fuels the night life.

11. The Danube
From Budapest to the Black Sea, new cruises on a storied river.

12. Niseko, Japan
An Aspen emerges in Asia, with luxury to spare.

14. Antwerp, Belgium
A new breed of boutiques have made it a fashionista’s paradise.

16. Tlemcen, Algeria
An ancient Islamic city dresses up for a gala year.

19. Hyderabad, India
Dynastic grandeur in the heart of modern India.

20. Manchester, England
An industrial city reinvents its famed musical past.

21. Tallinn, Estonia
The beautiful capital city aims to shed its stag-party past.

23. Singapore
With new resorts and casinos, the city lets its hair down.

26. Guimarães, Portugal
A city of youth is fired up by its art scene.

28. Dresden, Germany
A new museum leads the way to a historic city’s future.

29. Oualidia, Morocco
On a Moroccan lagoon, oysters, flamingoes and no crowds.

31. Colonia del Sacramento, Uruguay
The ranches beyond a historic village offer a dose of rural chic.

34. Iraqi Kurdistan
Safety, history and a warm welcome in a stable corner of Iraq.

35. Durham, N.C.
A downtown turnaround means food worth a trip.

A decade ago, downtown Durham was a place best avoided after sundown. But as revitalization has transformed abandoned tobacco factories and former textile mills into bustling mixed-use properties, the city has been injected with much-needed life. In the heart of downtown, a crop of standout restaurants and cafes has recently sprouted around West Main Street, where low rents have allowed chefs and other entrepreneurs to pursue an ethos that skews local, seasonal and delicious.

The farmers’ market favorite Scratch Bakery has a brand-new storefront for its seasonal homemade pies that include chestnut cream pie and buttermilk sweet potato pie. At the cafe-cum-grocery Parker and Otis, the menu features sandwiches made with freshly baked bread from nearby Rue Cler and locally roasted java from Durham’s Counter Culture Coffee. And at the sophisticated Revolution, squash tamales, mascarpone gnocchi, and tuna with wasabi caviar rotate through the seasonal menu.
— INGRID K. WILLIAMS

38. Salonika, Greece
Out of the country’s economic woes, a new wave of artists.

39. Okinawa, Japan
A ‘Japanese Amazon’ with some luxury thrown in.

40. Budapest
A scene pops up in abandoned buildings, and glamour rises.

41. Miami
Big-time music arrives in a town known for beaches and art.